The proposal grew out of a public space that drew the waterfront of the island of Arousa. We note as it ended at our ground and decided to extend it for continuity. That was our starting point.

The Arosa island is presented as a small world that binds to the mainland by a single point, a bridge that connects the mainland with the Galician island. The ground is decontextualized from the urban center and close to the sea limits.

The project is proposed by the conditions found in the environment (South boardwalk, main road and main access to the site on the west, and the dividing of the site by the North and East) and a building is designs that "will be" present for their uniqueness while "share" public space with its volume.

The proposal is sensitive to the environment and not ignore his surroundings. A number of schemes are presented with those conditions that were considered at the time to raise the proposal.

Since the initial parameter of fragmenting the project in two scale: the human scale and the industrial scale, 2 volumes are constructed with different constructive strategies. On the one hand the first volume of reinforced concrete with a monolithic appearance, and by the other hand, the part of the nave, more industrial character, is constructed with a prefabricated concrete structure.

The building is placed volumetrically as a "Zig-zag ladder" oriented from north to south, the volume of the north area is the most elevated piece until arrive the last volume of the sud area where we find the most depressed part. With this action we avoid projecting shadows on the building itself, apart to get the most "sunlighting" in the facades, providing natural light throughout the year. This placement of the volumes also favor a cross ventilation in the different parts of the building avoiding the typical damps in the humid climates near the sea as the island of Arosa. 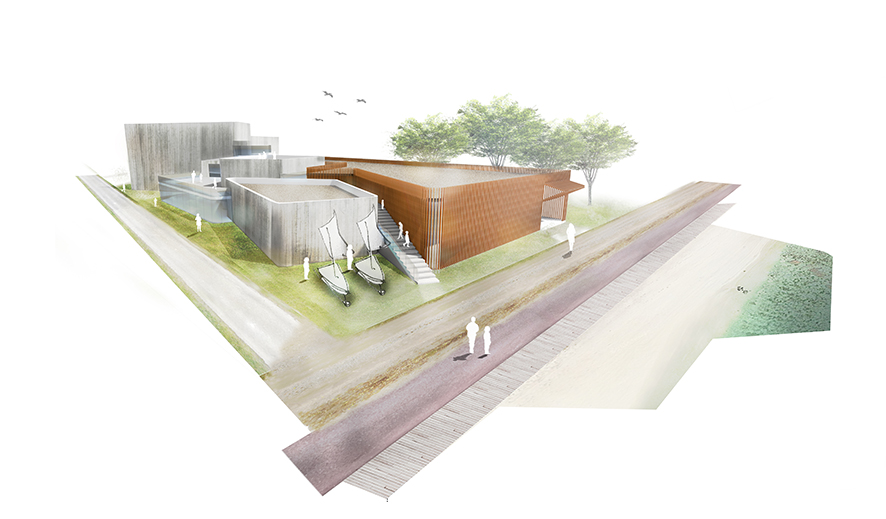 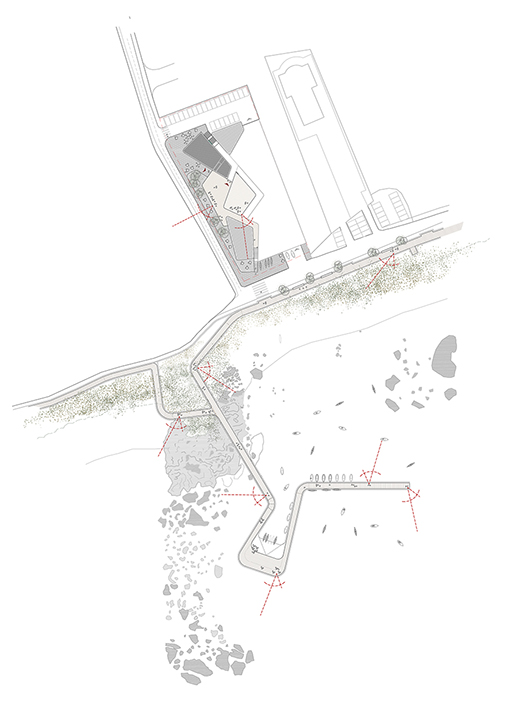 Lanscape / Urban planning
We proposed to continue the existing seacoast to reach the sea. We think that the extension of the existing promenade allow carry a vessel and canoes to a safe sea area. This promenade that we were proposing would be part of a new public space where pedestrians would have a role becoming a space for walking, fishing, etc. 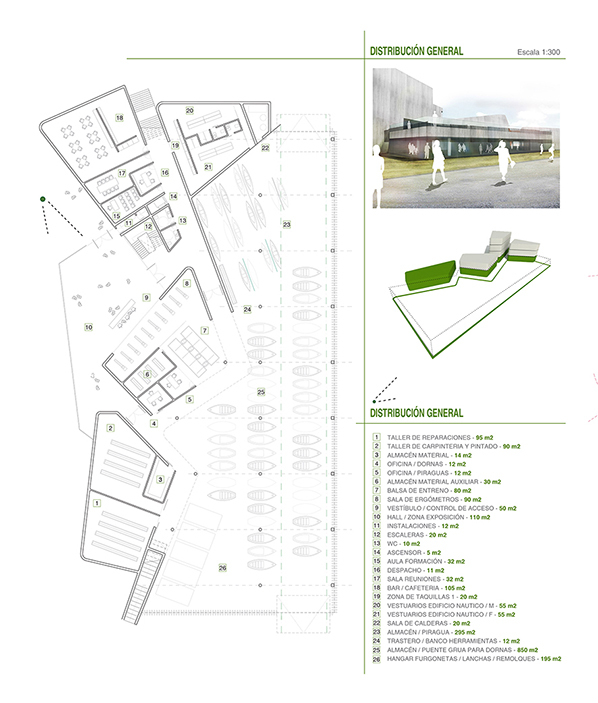 Level 0
On the ground floor we situate the 2 large areas of the program; on one hand the area belonging to the part of management (human scale), and on the other hand, the industrial part of the building (nautical scale). The two spaces are articulated through a longitudinal central axis containing all internal circulation spaces. 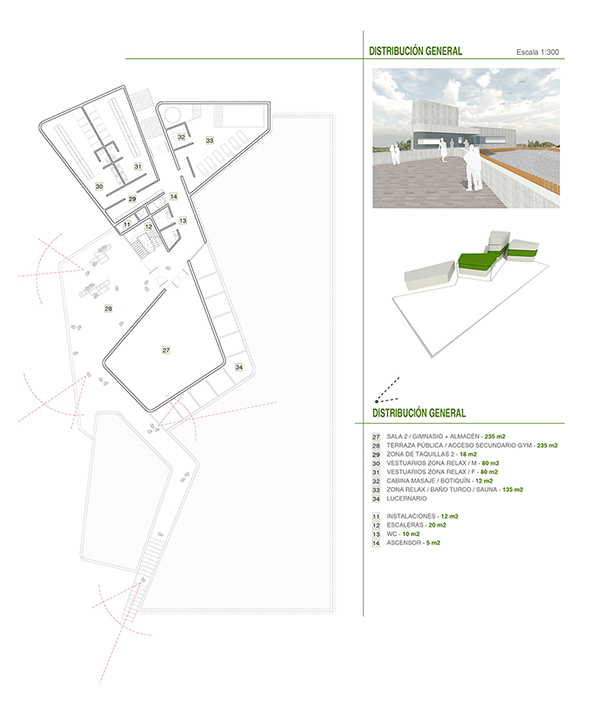 Level 1
On the first floor there is a spa, fitness room, Changing rooms and a terrace with sea views. Access to this plant can be produced by 2 points (From inside the building or by the outside public space linking the seafront with the terrace of the building).

Level 2
On the second floor are the other two fitness rooms with panoramic sea views and its surroundings. In front of them is a viewpoint overlooking the sea. This space, taking a more public character that tries to generate a direct connection with the sea of visual shape, creating a privileged view from where you can spot output the boats. 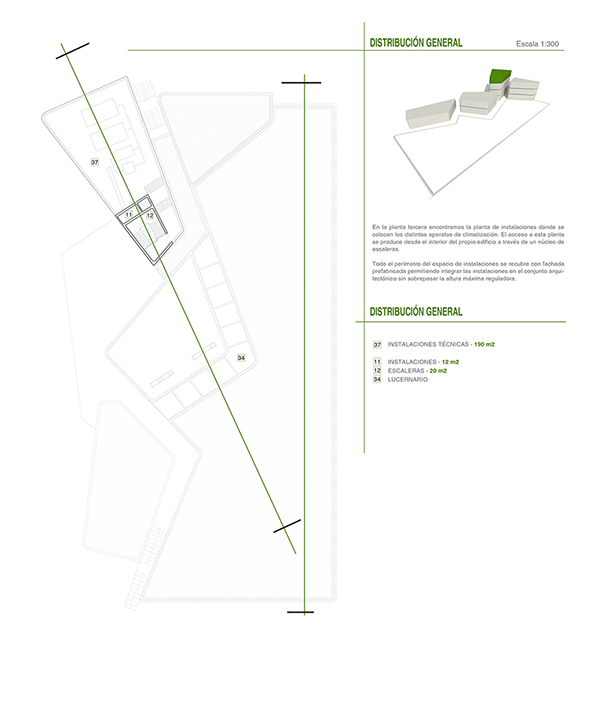 Level 3
On the third floor is the floor of the facility. The entire perimeter of the facility space is covered with a prefabricated facade allowing the integration of facilities throughout the building.

Relationship with the sea
A determining factor for the proposal was to establish a direct relationship with the waterfront, creating a perpendicular access to the sea for the exit and entrance of Yachts & canoes. The environment affected directly the connection due to the tides of the place and by the existence of a large rock surface near that hindering the exit of the canoes to the beach. This fact implied that we did an urban exercise in place by the continuation of an existing boardwalk.

Access / Communication
Due to being situated on the waterfront, the parking area is placed on the north side of the ground giving priority to a direct relationship between the building and the sea occurs. The only vehicular access to the ground is by the west side, this is going to also condition the main entrance to the building. On the other hand, after analyzing the program we should take into account the transport ship and placement of a nautical area where the crane bridge will be the protagonist of the space. We appreciate that the project should respond to simple operation using 2 clear directions; A transverse (human) and the other longitudinal (Canoas) connecting these to the sea.

Areas / formalization
As a first intuition we see a ground divided into two main areas, human (main entrance) and industrial (storage of canoes) conditional placement and adaptation in place. In place we get the view from the sea and its runoff and sand and rocks.

Man Vs Boat
From the beginning, the building was raised by 2 different scales; the human and naval. This distinction arose from the desire to understand the future equipment as 2 areas responding to different needs and uses. Just do not understand boats workshop (industrial scale) than a gym (human scale).

Constructive sketch
The two blocks of program are associated with two different structural systems enabling construction in different phases without an area not interfering with another. 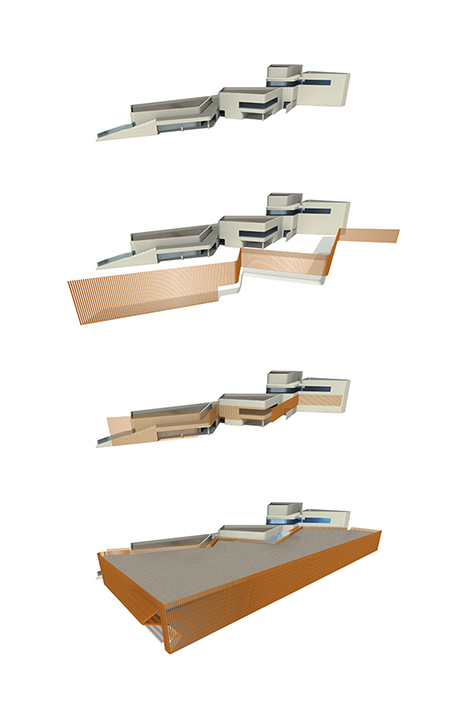 Materiality
The union of the two areas (reinforced concrete and precast concrete) is explained in the following sequence of images. The monolithic whole, free form is presented to the body of the nave. A first facade provides the main link between the human scale and the scale naval; and then it is added the whole big nave, subtle and almost imperceptible form, from the main facade. 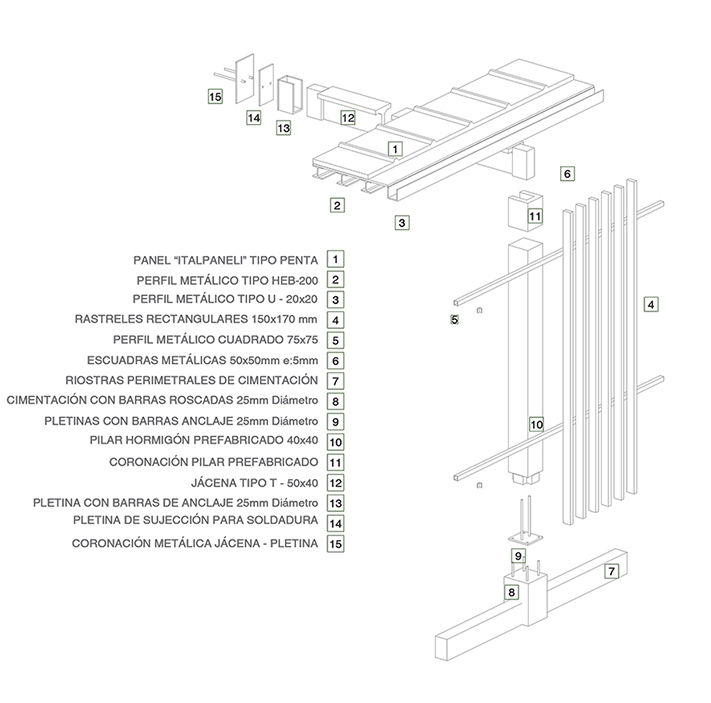 Efficiency Schemes
Sketch where the projected shadows of the building are analyzed, the sunlight of the facades and the differents air circulation produced in determined areas of the project.

Volumetric section
It is performed a permeable facade in the perimeter of the nave, letting pass the air but at the same time protecting from rain and the weather favoring the natural circulation